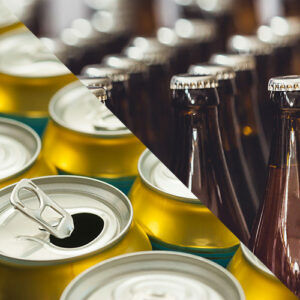 The most environmentally friendly way to drink a beer is to walk or ride your bike to the nearest pub and have a pint or two from the tap – with your friends. Any sort of social consumption reduces everyones’ footprint. Nevertheless, people will still buy their beer to go, and there are two options: cans or bottles. But which is better?

Beer is called ‘liquid bread’, and like bread it will stale over time with oxygen being the biggest contributor. Bottles have more empty space at the neck than cans, and the oxygen in the air will stale your beer faster. Also, glass lets light into the beer. When sunlight, or even artificial light, shines on beer it reacts with the hops and creates an unpleasant aroma. Brown bottles protect beer from most of those harmful rays, but green and clear bottles let more light in. Light is really only a problem if you drink beer after its best-by date or if you leave it in the sun for a week before drinking it!

Making glass is very cheap and not very energy intensive. Typically, a glass bottle is made with between 20 and 30 percent recycled material. Also, bottles are made with silica, which is an abundant resource and its mining usually has limited environmental impact.

Glass is heavy, especially when compared to aluminium. This means that glass bottles have a larger carbon footprint when it comes to transportation. They also take a large amount of thick cardboard packaging to make sure the fragile glass bottles don’t break.

Facilities to recycle glass are harder to come by than those for aluminium cans. Many local authorities refuse to collect glass alongside other rubbish or recycling, citing difficulties in repurposing glass should bottle break and different colours mix in transit.

Reusing has less impact than recycling and bottles can be reused, cans can’t. In some places bottles can be returned to the supplier. They are then checked, washed and sterilised and are ready to be refilled again. If this happens their eco-footprint is ten times less than that of a can or bottle that is made from virgin materials.

Growlers (also known by other names like flagons or jugs) were popular in the 19th century as a way for drinkers to bring a jug of beer home from the pub. They are a large glass (plastic or metal) bottle that have made a comeback in recent years with the rise of craft beer breweries. Many craft breweries sell beers straight from the brewery without the expense, or footprint, of bottling or canning.

In terms of flavour, a growler has a lot more headspace (and hence a lot more oxygen) than bottles or cans, so beer inside doesn’t last very long before it stales. When you open your growler, a lot of the carbonation gets released. If you don’t drink it all and you reseal it, be sure to drink it within 48 hours, even then, the beer will be noticeably flatter than before.

In terms of sustainability, as long as you reuse them over and over again, growlers should have the lowest environmental impact, especially compared to single-use bottle and cans.

Cans keep beer fresh and stable for longer. Cans are sealed under pressure so very little oxygen gets in, and they protect the beer from the effect of light. Also, cans are lined inside with a protective seal that prevents any metal taste coming through. However, they do warm up faster than thicker-walled bottles.

From a sustainability point of view, the major downside to cans comes from making new aluminium. Aluminium producers start with bauxite which is an ore with high levels of aluminium. Bauxite is often mined in open-cast mine operation which requires massive equipment that damages the environment. Manufacturing a can is much more energy intensive than making a glass bottle. To produce a tonne of virgin aluminium from bauxite can use ten times as much electricity as manufacturing the same amount of glass from sand.

However cans are lightweight, so their greenhouse gas emissions during transport are 40 percent lower than that of bottles or growlers. Cans also have less cardboard to hold them and to transport them. Any packaging adds to a product’s footprint.

Aluminium cans are a high-value material and are recycled more than bottles. According to the Aluminum Association, on average cans are made with 70 percent recycled content, and people recycle their cans 20 percent more often than they recycle glass.

The aluminium can is one of the most easily recycled materials, and recycling a can uses 90% less energy than recycling a glass bottle.

In conclusion: Bottles or Cans: Which is Better?

For flavour, cans are the clear winner.

For sustainability, growlers are the winner as long as you use them repeatedly. Bottles that you return to the supplier to be reused come second. And if you’re only using them once, then cans beat bottles.