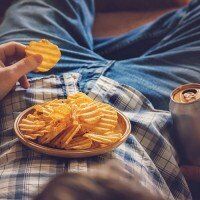 The downsides of comfort and convenience

Our economic system is geared to providing ever more convenience and ‘value-added’. Some convenience can certainly be good, but too much convenience is certainly bad. With its promise of comfort and ease, convenience attempts to eradicate all sorts of troubles, irritations and challenges that can help give meaning to life. Designed to free us, convenience can become counter-productive, and in the end, subtly capture us in its stupefying web. If people spend their time seeking ease they will tend to become more unhealthy, complacent, isolated, entrapped and unfulfilled.

The desire for convenience is often founded on the distaste of physical work. But physical work is not always distasteful, indeed it is often rewarding. Our character is partly expressed in the time and effort we put into the tasks, projects and pursuits we undertake – whether by duty or by desire. There have always been those who resist convenience and ease, sometimes out of stubbornness, but also because they see a threat to their sense of freedom and identity. They realise that the easy way is not necessarily the best way, indeed it often isn’t.

The first wave of convenience brought by technological advancements in the first half of the last century included the automobile, electric lights, fridges, washing machines, supermarkets, drive-throughs, telephones, televisions, TV meals, processed food, and many other innovations. However, by the late 1960s convenience started to mean standardisation and conformity, for many people. The counterculture was precipitated by individuals needing to express themselves, to live deliberately, and to live in harmony with nature instead of trying to suppress it. Even though it might not be as easy, self-sufficiency was perceived to be more vital and freeing than being yoked to the consumerist lifestyle. These free-thinkers wanted to ‘take the value-added back’ as one of their heroes, E.F. Schumacher described. They wanted to add their own value to their lives as unique individuals.

In spite of this back-to-the-land revolution, in the 1980’s the rise of computer systems, and in particular, the advent of the personal computer, brought another wave of convenience to grip society. Personal computers gave people a tool that would make work, study and play much more effortless. The invention of the internet was intended to provide a vehicle for the dissemination of information and a platform for sharing and collaboration. However, it wasn’t long before these basic information services developed into more commercial practices offering speed and convenience. You could shop online and get it delivered to your door. How convenient is that!? When online banking matured people started asking why weren’t other services online. Sure enough, one by one, they got there.

You can now pretty much do anything online from the comfort of your home or work. Shopping and deliveries; banking and financial services; selling and trading; entertainment, gaming and gambling; travel and accommodation bookings; training, education and coaching; bookkeeping and tax returns; video-conferencing; online registrations, applications and other forms; the list goes on and on. Couple these web-based interactions and services with email, text and smartphone and convenience goes through the roof.

However, no more standing in line, no more waiting, no more meeting actual people means more isolation. Also, social media means we don’t have to bother going out to see our friends and family. At least in the old days when people just had one TV families would watch together. Now everyone watches alone. We have a pandemic of social distancing, and it was happening long before COVID-19. Television, computers and smartphones are the new normal. Many people, especially in richer countries, would scarcely know what to do if they didn’t have these conveniences. There are people who are now 30 who don’t remember life without the internet. Of course, the internet is a wonderful innovation, but again, some convenience is good but too much convenience is bad.

More and more, people want instant gratification. It’s all about the destination and not the journey. In the past, most things took time, certainly longer than they do now. The problem with speed is that like other conveniences it can become counter-productive and even downright debilitating. The stress caused by the speed of modern life is well documented. We are literally wired, usually wirelessly.

Cars are admired for their speed, comfort and convenience. They are very convenient if you need to get somewhere in a storm, in an emergency or if you are disabled. However, the social commentator Ivan Illich argued that the car is counterproductive when you consider its speed. Add up all the hours you spend to make the money to buy the car, pay for fuel, oil, tyres, maintenance/repairs, insurance, registration, car parks and, if you are unlucky, accidents. Then add this to the time you actually spend in the car including traffic jams and driving in circles looking for car parks. Take this total and divide it by the number of kilometres you travel it is likely to be slower than biking and even walking in some cases.

Walking or biking has benefits the car doesn’t have. A study done by Canterbury university students showed that on four out of five routes to the university at peak hour a bike got them there quicker than cars that left at the same time as them. Walking and biking are good for your health (mental and physical) and they save money. Not to mention walking and biking are much better for the natural environment, they reduce traffic congestion and the need for more roads.

If you always take the easy road you can miss out on the best views.

This type of value-added happens to every single sort of produce. It doesn’t end there either. Other processing companies will create products from a mixture of raw materials and essentially do all your food preparation and much of your cooking for you. There are countless choices of ready-made meals (and ready-made everything) and all you have to do is heat them up while you are sitting on the couch.

There are significant health issues related to sedentary, easy lifestyles. The epidemic of lifestyle diseases in the past seventy years such as cardiovascular disease, high blood pressure, obesity, diabetes, stroke, certain cancers and well, preventable early death, are correlated to sedentary habits and diets high in energy but low in proper nutrition. (See examples of recent studies here»). The message is clear: whilst there is a place for convenience foods and fast foods they should be minimised as much as possible.

Also, in the same time period, there has also been a huge increase in mental health diseases like depression, anxiety and substance abuse which many psychologists blame on affluent lifestyles.

Convenience for liberation or servitude?

Value-adding along with the convenience of modern appliances liberated women, in particular, from the ‘drudgery and servitude’ of housework. This meant that they could now work in the ‘money economy’ rather than the ‘home economy’. Consequently, a huge proportion of women joined the workforces of countries around the world in the middle-to-late 1900s. Many of them unskilled, they ended up in factory work and other menial jobs working in ‘drudgery and servitude’ for a stranger who would profit from their labour.

Workers do get paid though which they use to pay the same rich guys they work for, for labour-saving devices, cars to get to work and pick-up their children from childcare, processed food and ready-made meals, and the consolations of fashion shopping and mindless entertainment. It is good that women are liberated and have the freedom to choose the work they want to do. However, being a home-economy worker is much more dignified, satisfying and rewarding than many servile money-economy jobs.

On average, women are more educated and skilled for money-work than ever before. It is a moral outrage that women still get paid less than men on average for doing the same job. This must change. It is also a moral outrage that house-work is not valued at all. Unfortunately, because home-work has no financial value, it is not seen as valuable – but it truly is.

The ideology of convenience fails to recognise that overcoming difficulty and the challenges of daily life is a meaningful and satisfying aspect of human experience. Whereas being passive and lazy is devitalising and worthless. Challenge and struggle is not necessarily a problem. It can be the solution to becoming a better, more vital and more fulfilled person.

Inconvenience rewards us with growth because it involves an encounter with some form of obstacle or resistance – with the limits of our own abilities and energies for instance. By overcoming these challenges we develop our skills and our will-power which means we can take on greater challenges and grow as active agents in life. When people use their will-power and self-discipline is often when they are happiest. Comfort and ease are good, but only as a reward and refreshment for working to overcome inertia, passivity and the vital challenges of life.

Don’t forget that doing something worthwhile that is slow and difficult lets us express our highest ideals.