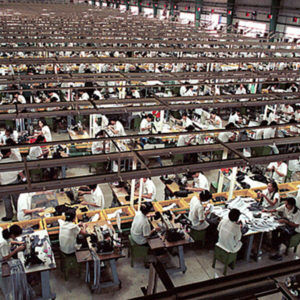 The following is an excerpt from the revised of edition of the Econation book Light Feet. In this excerpt we look at one of the most destructive human traits, namely, exploitation.

Humans are predators, and extremely good predators at that. Humans prey on everything, not just food, but also many other resources. Humans even prey on each other. In this sense, to prey upon means to exploit.

The human ability to exploit the environment and its resources has made us the most dominant species on the planet. This in turn has given people an arrogant ‘myth of specialness’, a myth that is encouraged in our cultures.

Humans exploit through the manipulation and control of nature with the aid of technology. Our technological prowess is heedless. A blatant example of this is the case of leaded petrol. Lead poisoning was a well-known issue long before producers started adding lead to petrol and yet they did it anyway and no-one stopped them. There are many cases like this of technologies being introduced that were known to be unsafe, and there have been countless more where it was not known if they were safe or not, which is just as bad.

We have looked at greed, rivalry and territoriality as forms of selfish exploitation of people and resources. Another dysfunctional trait is power. The need for power is an unconscious way to cope with the feeling that one is weak, contemptible, and unlovable. The philosopher Friedrich Nietzsche is known for his notion of ‘Will to Power’. However, people have continued to misunderstand what he meant by this. Nietzsche discerned between power that was creative and power that was destructive, and he clearly preferred the use of power that expresses creativity, beauty, and life-affirmation. He never advocated the pursuit of destructive power and he criticised the use of power that is ugly or stems from weakness. Nietzsche wrote:

I have found strength where one does not look for it: in simple, mild, and pleasant people, without the least desire to rule—and, conversely, the desire to rule has often appeared to me a sign of inward weakness: they fear their own slave soul and shroud it in a royal cloak (in the end, they still become the slaves of their followers, their fame, etc.) The powerful natures dominate, it is a necessity, they need not lift one finger. Even if, during their lifetime, they bury themselves in a garden house!

For Nietzsche, the Will to Power was about internal power, a power over oneself, which would lead to self-mastery and self-transformation, or in other words what Nietzsche called “self-overcoming”.

People who use power in destructive ways are arrogant. A type of arrogance comes from the ‘myth of our specialness’ ingrained in our collective psyche. It is thinking that since we are the most intelligent, most dominant life-form on earth, we can do what we like. Arrogance leads to attitudes of entitlement, self-indulgence and thoughtlessness, even when that means the mass extinctions and the ruination of nature. It is said that if humans suddenly ceased to exist, all the other life on earth would sigh with relief. Arrogance is related to the Fixed mindset. It says “I am right, and I will continue to prove it”. It is a supreme vanity.

The vice of arrogance is the opposite of the virtue of justice because it says that human individuals can have more than their fair share, taking more than they really need and exploiting and dominating our shared planet in unsustainable ways.

Our species is considered to be one of the most violent on the planet. The extent of human violence, brutality and cruelty throughout history is astonishing. As is said, human history is a mass grave.

In the 20th century alone there were major massacres in Rwanda, Yugoslavia, India and Darfur (Sudan) not to mention the well-known and wide-spread exterminations of inside-outsiders in Nazi-controlled Europe, Stalinist Soviet Union and Maoist China.

The escalation of hate crimes, notably mass shootings, in recent times, even in far-flung, peaceful places like Norway, New Zealand and Australia is a symptom of instinctual behaviour running amok. Hate crimes are an extreme form of discrimination and prejudice but the root cause of hate is a perceived threat to a person’s identity, territory, jobs, values or even their very existence. The hate is usually directed at ‘outsiders’, such as immigrants or people of a different race, sex, culture, religion, sexual orientation, political allegiance and so on.

This all points to the fact that human morality and emotional intelligence has not evolved much, if at all, since the Pleistocene.

Interpersonal violence has arguably decreased over human history, at least in proportion to the total population. This reduction has been described in some detail by Steven Pinker in his book, The Better Angels of Our Nature. Pinker claims there are several developments that have reduced violence over the centuries, particularly higher levels of education, human rights and democracy.

However, the sheer power of the tools and techniques that we have for perpetrating violence has quite literally exploded. Nuclear war is the proverbial elephant in the room and is a very real and significant threat to all life on earth.

Also, with the development of industrial civilisation, a different form of violence continues to escalate. Humans, through technological manipulation of resources, have come to dominate most types of environment in the world. Indeed, we are arrogant uber-predators who have made nature our slave.

Mahatma Gandhi was known for his stance of nonviolence in society. However, Gandhi didn’t just talk about violence in the political and social realm. He considered the dramatic growth of industrialisation in the 20th century as a form of violence against both people and the environment.

Gandhi felt that a simple life with few needs which are provided for locally was the most non-violent way of life. He felt that industrialisation was unnecessary. He often talked of his dream world where people lived in self-sufficient small communities who rule themselves without hindering others and sustain themselves in harmony with nature “and in which brute and material force will be subordinated to the spiritual force.”