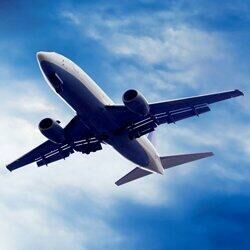 Flying is bad for the environment and a major driver of climate change. The number of flights is forecast to more than double over the next few decades, making the problem worse. Flying is the fastest growing cause of climate change.

95% of all people in the world have never set foot on a plane.

Poorer countries who stand to suffer the worst effects of a changing climate have the least proportion of flyers.

Why should a small number of rich people take advantage of the global environment that belongs to everyone? The fair solution is that those that fly more should pay progressively more.

The majority shouldn’t have to subsidise the air miles lifestyle of the elite which is why there should be a Frequent Flyer Levy. This sort of system would see nothing charged on the first return flight that an individual takes each year, but would see it increase progressively the more flights the individual takes.

This levy should be used to mitigate the greenhouse gas emissions from flying.

By doing this we can help limit the environmental impact from flying in a way that is fair and doesn’t penalise the majority for the actions of an elite.