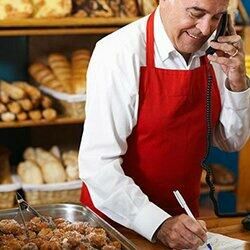 The following is Part One of an excerpt from Michael Lockhart’s upcoming book called Wise First, Clever Second which is about post-industrial design and production. The key premise of the book is that whilst industrial design and production is very clever, it is not wise. The main problem is that there is too much making and not enough designing with wisdom and integrity. Post-industrial production will be wise first and clever second.

The industrial paradigm is to produce more than is really needed, but over-production detracts from well-being at the same time it is doing environmental harm. Wise design will foster sufficient production.

Prior to the industrial revolution there was much less production and a large amount of what was produced was produced in and around homes. People were much more self-sufficient than people in the developed world now.

Whilst the majority of people worked the land there were also specialist craftspeople who produced a range of goods, largely by using basic hand tools. Designs were traditional and whilst the craftsperson may have used some individual flair and skill to perfect the work, there were few radical departures from the norm.

Production would have been slow but craftship (to use a new gender neutral term) was more important than speed. In particular, utility and durability would have been paramount concerns.

Will we go back to the methods of pre-industrial production? Yes and no. On the ‘yes’ side, post-industrial production will be more local, use less energy and be more hands-on as it was before. In the post-industrial future a number of heritage technologies will be revisited. Whilst these technologies will probably be done with a modern spin, they will nevertheless be done in simpler, gentler ways, a bit like they used to be. Significantly, production will go back to being more human, meaning more connected to individuals, both as producers and consumers.

However, on the ‘no’ side we will still have energy from renewable sources. Some modern machinery and tools can be resized to an appropriate scale, speed and energy consumption for the required demand. We currently have infrastructure and services that can be adapted to suit a moderate energy future. Also, information and communication technologies will help provide the efficient co-ordination and provision of goods and services.

All of this is not a Utopian dream, it will be an absolute necessity if humans are to continue to thrive. If the post-fossil fuel world is not sustainable, it will not last, and if it is not focussed on universal well-being then what exactly will be the point of it?

An entirely new system of thought is needed, a system based on attention to people, and not primarily attention to goods. . . .
– E. F. Schumacher

In the capitalist-industrialist system supply drives the demand for goods and services. Sufficient production is when demand drives supply. In effect the demand is for well-being.

Sufficient production will be driven by the need for quality and not quantity. Goods and services will have more durability, variety, utility, beauty and will have a local aesthetic and feel. As a result, goods and services will be more meaningful and have value that goes beyond the functional. More quality will support individual well-being and cultural sustainability. It will also mean less needs to be produced.

Sufficient production will be characterised by the following interrelated factors:

Utilise smaller, appropriate-scale technology. Smaller and human-scale implies it will be local production and vice versa. Smaller-scale operations are more environmentally friendly because by-and-large, small-scale operations are less wasteful and is therefore less energy and resource intensive. There are many other benefits of small operations which are discussed in this post called “The Ideal Business“.

Production will be more hands-on and labour intensive. Handcrafted goods have more of a human ‘soul’. They are made with the passion of real craftspeople, not the faceless precision of an automated factory. The factor of humanity is the one that can provide high levels of personal meaning and satisfaction necessary for well-being,

Less energy use and fewer emissions through clean-technology and renewable energy generation. Post-industrial production does not rely on fossil fuels and is carbon neutral. Instead it makes use of distributed diffuse renewable energy sources.

A circular operation is one that has a closed-loop resource flow. The outputs from one production process become the inputs for another. It means there is no waste and also less use of raw materials overall.

All of these factors just mentioned point to the conclusion that the most potent way to achieve greater quality in a smaller, localised and simpler way is craft industry.

Craft industry will allow society to produce environmentally sustainable goods and services. At the same time craft industry enhances cultural sustainability through diversity, quality, and the deeper value of meaning.

In the future the majority of post-industrial production, especially for the necessities of life like food, clothes, shelter and household goods, will be done by artisans, craftspeople and tradespeople in small factories, workshops, kitchens, boutiques, studios, and other operations.

In the next post we will discuss craftship and the benefits to both producers and consumers of craft production.