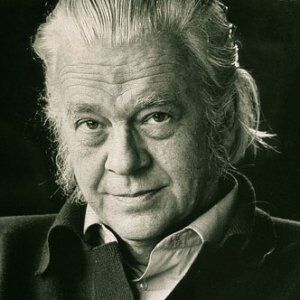 E.F. Schumacher is a hero of sustainability. He was an economist as well the author of the books Small is Beautiful, Good Work and a Guide for the Perplexed, in addition to numerous articles, essays, papers and talks. The following E.F. Schumacher quotes are some of the wisest thoughts about sustainability and well-being.

Wisdom demands a new orientation of science and technology toward the organic, the gentle, the elegant and beautiful.

Anyone who thinks consumption can expand forever on a finite planet is either insane or an economist.

The way in which we experience and interpret the world obviously depends very much indeed on the kind of ideas that fill our minds. If they are mainly small, weak, superficial, and incoherent, life will appear insipid , uninteresting, petty and chaotic.

No one is really working for peace unless he is working primarily for the restoration of wisdom.

Any intelligent fool can make things bigger and more complex… It takes a touch of genius – and a lot of courage to move in the opposite direction.

The system of nature, of which man is a part, tends to be self-balancing, self-adjusting, self-cleansing. Not so with technology.

Many of them had a better time than they ever had in their lives because they were discovering the new freedom – the less you need, the freer you become.

The art of living is always to make a good thing out of a bad thing.

An entirely new system of thought is needed, a system based on attention to people, and not primarily attention to goods. . . .

Any intelligent fool can invent further complications, but it takes a genius to retain, or recapture, simplicity.

Modern man talks of a battle with nature, forgetting that, if he won the battle, he would find himself on the losing side

It is doubly chimerical to build peace on economic foundations which, in turn, rest on the systematic cultivation of greed and envy, the very forces which drive men into conflict.

Modern economic thinking…is peculiarly unable to consider the long term and to appreciate man’s dependence on the natural world.

At present, there can be little doubt that the whole of mankind is in mortal danger, not because we are short of scientific and technological know-how, but because we tend to use it destructively, without wisdom. More education can help us only if produces more wisdom.

The best aid to give is intellectual aid, a gift of useful knowledge. A gift of knowledge is infinitely preferable to a gift of material things.

The purpose of work is to give people a chance to utilize and develop their faculties; to enable them to overcome their ego-centeredness by joining others in a common task; and to bring for the goods and services needed for a becoming existence.

There are three things healthy people most need to do – to be creatively productive, to render service, and to act in accordance with their moral impulses. In all three respects modern society frustrates most people most of the time.

The most striking about modern industry is that it requires so much and accomplishes so little. Modern industry seems to be inefficient to a degree that surpasses one’s ordinary powers of imagination. Its inefficiency therefore remains unnoticed.

I started by saying that one of the most fateful errors of our age is the belief that the problem of production has been solved. This illusion, I suggested, is mainly due to our inability to recognize that the modern industrial system, with all its intellectual sophistication, consumes the very basis on which is has been erected. To use the language of the economist, it lives on irreplaceable capital which it cheerfully treats as income.

A way of life that ever more rapidly depletes the power of the Earth to sustain it and piles up ever more insoluble problems for each succeeding generation can only be called violent.

Scientific and technological “solutions” which poison the environment or degrade the social structure and man himself are of no benefit, no matter how brilliantly conceived or how great their superficial attraction.

There is incredible generosity in the potentialities of Nature. We only have to discover how to utilize them.

Our ordinary mind always tries to persuade us that we are nothing but acorns and that our greatest happiness will be to become bigger, fatter, shinier acorns; but that is of interest only to pigs. Our faith gives us knowledge of something better: that we can become oak trees.

The richer a society, the more impossible it becomes to do worthwhile things without immediate pay-off.

That soul-destroying, meaningless, mechanical, moronic work is an insult to human nature which must necessarily and inevitably produce either escapism or aggression, and that no amount of ‘bread and circuses’ can compensate for the damage done-these are facts which are neither denied nor acknowledged but are met with an unbreakable conspiracy of silence-because to deny them would be too obviously absurd and to acknowledge them would condemn the central preoccupation of modern society as a crime against humanity.

Even bigger machines, entailing even bigger concentrations of economic power and exerting ever greater violence against the environment, do not represent progress: they are a denial of wisdom. Wisdom demands a new orientation of science and technology towards the organic, the gentle, the nonviolent, the elegant and beautiful.

Development does not start with goods; it starts with people and their education, organization, and discipline. Without these three, all resources remain latent, untapped, potential.

An ounce of practice is generally worth more than a ton of theory.