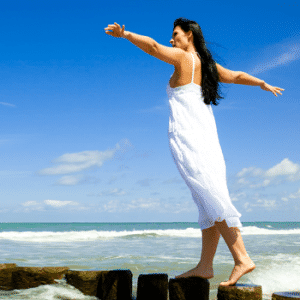 In a letter to Rachel Carson, Thomas Merton discussed one of the fundamental ills of modern society, namely heedless technological progress. Merton’s argument makes a compelling case that this type of progress derives from what I would call a survive-at-any-cost mindset. In order to progress our humanity, we need to change to a much wiser thrive-at-least-cost mindset.

The release of Silent Spring, Rachel Carson’s 1962 book, catalysed the modern environmental movement. Her exposé of the violence done to the environment by the heedless use of chemicals (like DDT) sparked a major controversy. Popular opinion inspired by this controversy led to the first Earth Day and to the creation of the Environmental Protection Agency in the United States.

Thomas Merton, the theologian and Trappist monk, had long admired Carson’s devotion to science as an expression of her human bond with nature. After reading Silent Spring Merton wrote a letter to Carson to express his personal esteem and to opine on the major theme of the book. In the letter he wrote:

[Silent Spring] is perhaps much more timely even than you or I realize. Though you are treating of just one aspect, and a rather detailed aspect, of our technological civilization, you are, perhaps without altogether realizing, contributing a most valuable and essential piece of evidence for the diagnosis of the ills of our civilization.

I would almost dare to say that the sickness is perhaps a very real and very dreadful hatred of life as such, of course subconscious, buried under our pitiful and superficial optimism about ourselves and our affluent society. But I think that the very thought processes of materialistic affluence (and here the same things are found in all the different economic systems that seek affluence for its own sake) are ultimately self-defeating. They contain so many built-in frustrations that they inevitably lead us to despair in the midst of “plenty” and “happiness” and the awful fruit of this despair is indiscriminate, irresponsible destructiveness, hatred of life, carried on in the name of life itself. In order to “survive” we instinctively destroy that on which our survival depends.

Man’s vocation was to be … as the eye in the body … [b]ut man has lost his “sight” and is blundering around aimlessly in the midst of the wonderful works of God. It is in thinking that he sees, in gaining power and technical know-how, that he has lost his wisdom and his cosmic perspective.

Technics and wisdom are not by any means opposed. On the contrary, the duty of our age, the “vocation” of modern man is to unite them in a supreme humility which will result in a totally self-forgetful creativity and service.

The survive mindset is running amok

Merton’s words convey a powerful sentiment, and the sentiment is also a pointed definition of what Econation’s philosophy is. It is that affluence does people harm, as well as harm to the environment. As Merton says, the thought processes that lead us to ‘seek affluence for its own sake’ using ever more powerful technologies are ‘self-defeating’. This is because affluence has ‘built-in frustrations’ which lead to dysfunction and destructiveness. He concludes that our technical prowess must be combined with wisdom to move us on from the ‘survival’ mindset to what he calls a ‘supreme humility’.

It is wisdom that people need to develop in order to progress. However, there are affluent people who are stuck in a ‘survival’ mindset, even with far more than they need. As E.F. Schumacher said, our disease has been to allow “cleverness to displace wisdom”. The survive mindset mirrors what the psychologist Carol Dweck calls a ‘fixed’ mindset. A ‘fixed’ mindset causes people to stop progressing, in general, so they just keep doing what they are good at. This is what the drive for material affluence is: doing the same thing over and over. It is the constant advancement of technical prowess and exploitation of the environment in order to stockpile the same rewards, namely, material wealth.

The opposite of the ‘fixed’ mindset is what Dweck calls the ‘growth’ mindset. This is when people continue to develop themselves. Once someone has developed enough in one respect, they move on to the next thing, and then the next. The ‘growth’ mindset is a type of ‘supreme humility’. It says “I am not the finished article and I will continue to get better”. In contrast, the ‘fixed mindset’ is the same as what Merton calls “our pitiful and superficial optimism about ourselves”. The ‘fixed mindset’ says “I am the finished article and I will continue to prove it”.

At a societal level, the predominance of the ‘survival/fixed’ mindset leads to more of the same. This forces ever-increasing damage on the environment, and ironically, damage to people’s ability to thrive.

To thrive and not just survive

In order to thrive, and not just survive, people need to change mindsets. This will also go a long way to saving our planet. Thriving is based on a vision of what one could be, whereas survival is based on what one is. We thrive when, after we have sufficient material wealth, which is surprisingly little, we move on to the next thing. How this actually plays out in people’s lives will be different for every individual and family. Every person has different interests, different abilities, different aspirations and different potential. However, every person has the potential to be better and to have a fulfilling life. It is possible to make a sufficient living and develop rich lives full of positive relationships, ethical and rewarding work, meaningful pursuits and memorable experiences.