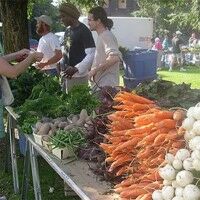 Farmers Markets are evidence that bigger is not better – whereas smaller and simpler are. Farmers markets directly connect producers of food with consumers. These simple, effective transactions unwind the complex system of efficiencies and ‘economies’ which make modern markets unsustainable.

The smaller farms are, the greater their yield. This discovery was first made in 1962 by the Nobel economist Amartya Sen and has been confirmed by many other studies since then. In some cases, the difference is enormous. A recent study of farming in Turkey, for example, found that farms of less than one hectare yield twenty times more produce as farms of over ten hectares. Small-scale intensive farms not only produce more food they also provide more jobs with less environmental impact.

Industrial-scale agriculture is heavily reliant on fossil fuels for fertiliser and pesticides, as well as for cultivation, processing and transportation. A string of combine harvesters can do the work of hundreds of people with scythes, and in a fraction of the time. What this means is that in America today it takes 10 calories of fossil-fuel energy to produce one calorie of food energy. Indeed, most food in modern economies has negative net energy, meaning most food takes more energy to produce than it provides, which is obviously unsustainable and quite perverse.

There is a fundamental difference between being effective (high yield) and being efficient (high productivity). ‘Effectiveness’ can be defined as ‘doing the right things’ and ‘efficiency’ can be defined as ‘doing things right’. Efficiency is very important, but only if you are doing the right thing. Large-scale factory farming is the wrong thing, bigger is not better.

Why bigger is not better

If industrial farming produces food with much higher net-energy and lower yields per hectare, why aren’t all farms small? The reason is that small farms are less profitable. This is just one example of the perverse paradoxes that our modern economy creates – through the pursuit of efficiency and economies of scale (and consequent profits) effectiveness is reduced. In the search for cheaper food and higher profits some farmers will get the maximum output with the minimum of internal costs. This is generally achieved by increasing external costs such as water and soil degradation, job loss, lifestyle diseases, habitat loss and climate change.

Many people believe that the purpose of business is to make profits. It is argued that profits, which are ultimately fed back into the economy, benefit everybody. However profits are usually spent on creating more efficiency (e.g. larger farms, more machinery, more fertiliser) for the purpose of more profits. This spiral of efficiency leads to the ‘holy grail’ of economic growth which in turn leads to ever-increasing inequality, instability, vulnerability and unsustainability.

Farming and food production is just one example of an industry that utilises economies-of-scale but these exist in all industries.

Large mass-manufacturing plants have taken over small-scale factories and craft workshops. Many New Zealand manufacturers have shut down their plants entirely and moved production overseas to take advantage of cheaper labour and overheads. This has led to a plethora of cheap imported products that are sold at a high profit. Also, chains of large retail outlets have proliferated as the number of small local specialist shops has declined.

Even the news media has succumbed to efficiency. A large proportion of the news in your local newspaper, radio or TV has been created by huge news agencies that tend to have too few overworked ‘churnalists’. (For an excellent review of the state of modern news media industry read ‘Flat Earth News’ by Nick Davies.)

Unlike most other countries New Zealand has always had big farms.

When New Zealand was first colonised by Europeans (as in other colonies like the USA, Australia and Canada) land was plentiful and cheap but labour was scarce and expensive. This led pioneer farmers to create huge pastoral ‘runs’ on native grasslands or to clear large areas of native bush for creating pasture. This clearance caused terrible erosion in many hill country areas as well as a general, ongoing degradation of soils, not to mention enormous habitat and biodiversity loss.

Since the Second World War this situation has been compounded by the drive for more efficiency with the centralisation and supersizing of production, distribution and retail. This has led to growth in the size of certain farms (particularly dairy) and to the rise of corporate farmers. Increasing numbers of people profiting from food production are not farmers but absent owners and middlemen. Bigger is only better for profiteers.

As it happens, the average size of farms has decreased in New Zealand since the 1970s. This is largely due to the fact that larger sheep and beef farms have been converted to dairy farms which tend to be smaller. Also the number small ‘lifestyle’ farms has increased which, in many cases, are not farmed intensively and in some cases are not farmed at all. In recent decades there has also been a small but growing move to alternative farming methods including small-scale, organic, diverse, low-energy methods.

The renaissance of farmers markets

A farmers’ market is a food market where local growers, farmers and artisan food producers sell their produce directly to consumers. Vendors may only sell what they grow, farm, pickle, preserve, bake, smoke or catch themselves from within a defined local area. The market takes place at a public location on a regular basis.

Modern farmers markets buck the trend towards scale. The vendors are small farmers and food producers who cannot produce food as cheaply as factory farmers but by selling directly to the public they can compete on price.

In most cases their goods are more eco-friendly, and human-friendly, using less inputs such as herbicides, pesticides, fertiliser and energy. The goods are local, seasonal and fresh. This also means that they are using fewer resources (packaging, chemicals and energy) to produce.

Farmers markets are fun too. All food used to be sold in farmers markets. In the past market day was a time for socialising, networking and sharing information as well as trading. Modern farmers markets are just the same. They are also a way for you to learn more about the food you eat and to meet the people who produce it.

The benefits of craft production

The net energy of food