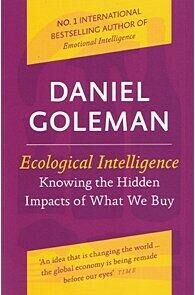 The main thrust of the book is that people can only make good decisions if they have good information to base their decisions on. Goleman talks about ‘vital lies’, a phrase coined by playwright Henrik Ibson, which is the comforting story we tell ourselves that hides a more painful truth. Goleman explains:

“When it comes to the full costs of ecological ignorance in the marketplace, we endorse the vital lie what we don’t know or can’t see doesn’t matter. In fact, our indifference to the consequences of the sum total of what we buy and do, and our unexamined habits as consumers, drive a vast number of threats to the environment and to health.”

Goleman talks about the need for ‘radical transparency’. It is the hidden, painful truths about what we consume that must be made apparent.

Goleman gives the example of shampoo which can have 50 or more ingredients which have all been made in chemical processes using other ingredients. One shampoo he mentioned had trace amounts of a known human carcinogen. The carcinogen was not noted on the label because it was there unintentionally as a residue from the process of making a foaming agent.

The ideal solution would be an international system of disclosure including the publishing of full details of a life-cycle assessment of every product and service. In addition a single, consistent system of code or codes could be developed for putting on labels and packaging.

If all this information is available then people who want to make good choices can make them. There is no guarantee that people will stop buying bad products, because as Goleman clearly points out in his earlier books, people are not just driven by rational decisions – there are such things as emotion and instinct.

Nevertheless it is better that people know the vital (if painful) truth of their actions rather than a vital lie.