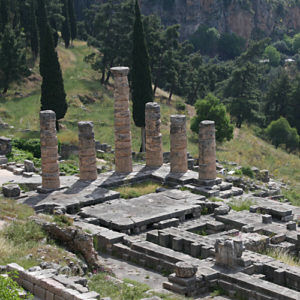 ‘Nothing in excess’ is one of three maxims inscribed prominently on the Temple to Apollo in Dephi.

Saying ‘nothing in excess’ is essentially the same as saying ‘everything in moderation’.

Moderation is one of the four cardinal virtues as stated by Plato (the others are prudence, fortitude and justice). Moderation is also a key principle in many other religions, philosophies and teachings. From Greek, Roman and Chinese philosophers to a wide variety of religious teachings such as Christian, Muslim, Jewish, Taoist and Buddhist.

The problem is knowing what ‘enough’ is. Terms like ‘enough’, ‘excess’, ‘moderation’, and ‘sufficiency’ are fuzzy, imprecise terms; they are all relative and debatable. For instance, what is enough for one person may seem a famine to someone else and a feast to yet another person.

Nevertheless, it seems that humans, unlike any other type of animal, don’t know when enough is enough. This is because humans think symbolically. In other words, to humans food isn’t just food. Animals are motivated by physical and basic social needs which are entirely instinctual. Humans are motivated by these too, but also by higher psychological needs. An animal eats only enough food because food is a deficiency need, meaning that once the animal’s hunger is sated it is not motivated to have more. For humans, food isn’t just for sustenance, it can be used to fulfil psychological needs that are not related to nutrition. In many cases people eat far beyond what they need for sustenance. Eating is generally a pleasurable activity and people can overindulge, often unconsciously. When you eat more than your body needs it is called hedonic eating. There are many reasons why people overeat, sometimes it is to cope with uncertainty, stress, sadness or tiredness, for example. And it is not just eating of course, people overindulge in all sort of things including clothes, alcohol, gadgets, drugs, gaming, browsing, social media, television, sex, day-dreaming and even sleeping.

Too much of a good thing

Obviously, the goods and activities mentioned above like clothes, food, sex and sleep are good things but you can have too much of a good thing.

Humans are using too much resources, we have overshot the earth’s biocapacity by more than 50%, and that’s a global average. In the western world this overshoot is much more like 400%. In other words, people in places like Europe, the United Kingdom, USA, Canada, Australia and New Zealand are using four times too many resources.

Excess resource use is caused by overproduction which in turn leads to overconsumption.

Too much convenience and ease

We talk about too much convenience and taking the value-added back.

The proverbial rat race is all too real for many people in affluent societies. Dictionary.com defines rat race as “…especially a pressured urban working life spent trying to get ahead with little time left for leisure, contemplation, etc.” The rat race is a matter of too much happening, and much of it can be stuff easily avoided. If people choose to live a simpler life they actually have more time to do the things that bring well-being including family relationships, personal improvement and meaningful pursuits.

Too little of a good thing

There is an ideal amount for everything, and that is never too much, or too little. This mirrors the Swedish mindset of ‘lagom’, a word which means ‘just the right amount’. It’s about balance and finding that golden mean between the extremes.

The three maxims inscribed on the forecourt of the Temple to Apollo at Delphi are: