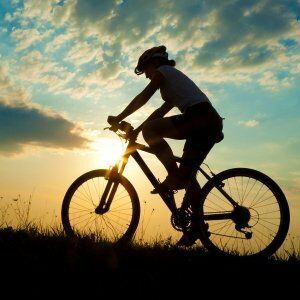 There is always talk of the convenience of cars but bikes are convenient too. For example, when cycling, it’s very easy to find a park and parking is free. You can get all the way to where you are going, whereas in a car you might have to park a long way away. Bike’s don’t need refuelling, and they don’t run out of fuel. They don’t get caught up in traffic jams. Cycling is inconvenient, or just not possible, in rain, snow and strong winds but the rest of the time it can be much more convenient than other options.

Seeing this article recently about the fastest way to the office reminded me of a similar experiment done by university students in Christchurch which found that four out of five routes to the university at peak hour were faster by bike than by car. The fact that bikes are not as badly affected by heavy traffic or other delays means that they are often quicker than cars or different types of public transport.

Tyres apart, a well-maintained bicycle will last for a long time. With much fewer parts to break down, they don’t need to repaired as often as cars.

Bicycles don’t burn any fuels to run and are therefore emission-free once they have been made. Electric bicycles are becoming more popular and whilst they may have emissions if the electricity is sourced from fossil-fuel generators they still have significantly less emissions than a car, even an electric one.

The average weight of a car is about 1400 kg, a bike rarely weighs more than 20 kg, or 1.5% of the weight of a car. This means that much less resources are needed for its construction. Bicycles are designed to be light but strong and durable. Also, cycling infrastructure needs less space than infrastructure for cars. A parking space for a car can fit 15 bicycles.

Cycling provides exercise which benefits both physical and mental health. Bicycles also contribute to healthier lives by helping to prevent a large number of severe and chronic diseases including cardiovascular disease, osteoporosis, type 2 diabetes and certain forms of cancer. More cyclists on the roads mean less fumes which is good for overall health as well.

Studies from London, Montreal, the US and Colombia show that cycling commuters are the most, or among the most, satisfied with their trips to work. Also, cycling is a wonderful way to tour as described in our ‘In praise of the bicycle’ blog post. There is a sense of achievement and the simple satisfaction of propelling yourself quietly and lightly along, and literally enjoying the ride!

In the United States, one mile of a high-quality protected bike-lane is estimated to cost US$0.25 million whereas an urban freeway costs  US$60 million per mile, or 240 times as much. It has been calculated that less traffic congestion from more cyclists in the European Union saves 6.8 billion euros a year.