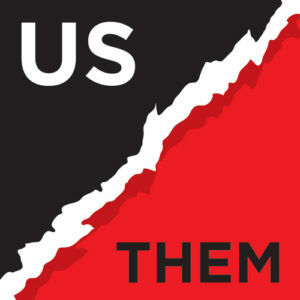 The following is an excerpt from the revised edition of the Econation book Light Feet. In this excerpt we look at another one of the most destructive human traits, namely, territoriality and tribalism.

Humans have an innate need to build and protect their territory. Territory includes tangible and physical elements such as land, habitations and possessions, but it can also include intangible belongings such as allegiances, religions, ideologies, customs and social-group identities.

It isn’t entirely clear why humans have an us-versus-them mindset. It’s obviously useful to have allies in evolutionary terms, but it is common in human society for alliances to change, sometimes quite arbitrarily, probably because group bias is usually unconscious. An adamantly unbiased person can quickly behave a different way under duress.

Countless tyrannical usurpers have used the Machiavellian strategy of divide and conquer throughout history. Divided groups of citizens, pitted against each other, are weaker and easier to control.

Every day you hear about one identity group or another making claims to boost their relative power. Thinking of ourselves in terms of groups automatically leads to a kind of irrational group bias. In the 1970s, the Polish-British psychologist Henri Tajfel developed a theory of social identity. This included the study of a phenomenon he called the ‘minimal group paradigm’. He investigated the minimal characteristics needed for discrimination to occur between groups of individuals. He discovered that people would identify with others even when they are grouped based on trivial and arbitrary distinctions, for example, hair colour, the kind of movies they like, or even the random flip of a coin.

In some experiments done on social identity, participants can allocate rewards to other participants. It will come as no surprise that they tend to favour giving points to the members of their own group. The study also found that participants are more willing to see their group win than have outcomes where all people end up better overall. Again, this is an example of our outdated evolutionary drives getting the better of us.